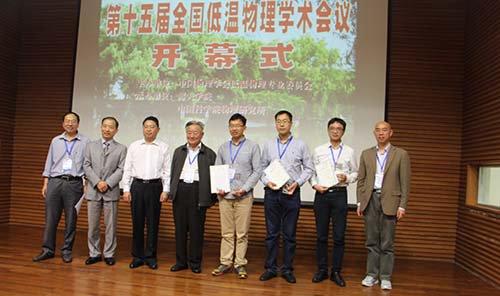 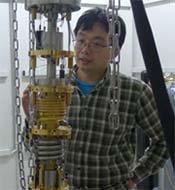 Biography: Xi Lin is born in 1980. He attended college at the University of Science and Technology of China and obtained his Ph.D in Physics from the Pennsylvania State University. He is currently an associate professor at the International Center for Quantum Materials, Peking University.

Xi Lin has over 10 years of experiences in experiments at ultralow temperature. He measured solid helium’s heat capacity down to ~20 mK, with the lowest concentration in 3He/4He phase separation. His lab at Peking University has a low temperature environment down to 6mK, with an electron temperature of 18mK. He is interested in quantum transport in mesoscopic devices, including studies in the 5/2 fractional quantum Hall state.

Citation: For the discovery of superconductivity in Mn- and Cr- based materials. 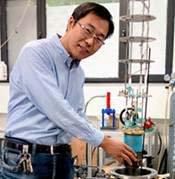 Biography: Dr. Jinguang Cheng is a professor in the Institute of Physics, Chinese Academy of Sciences (IOP, CAS), the winner of the “Hundred-Talent Program” of CAS and the “Thousand Youth Talents Plan” of China in 2013. He obtained his B.S. and M.S. in physics from the Harbin Institute of Technology in 2003 and 2005, and Ph.D. in Materials Science from the University of Texas at Austin (UTA) in 2010. Following two-year postdoctoral research at UTA, he spent another two years as a JSPJ (Japan Society for the Promotion of Sciences) foreign researcher in the Institute for Solid State Physics, University of Tokyo. He joined IOP CAS and became the group leader of EX6 in the Laboratory of Extreme Conditions Physics since 2014. His current research interest focuses on the explorations of emergent quantum materials and phenomena under high-pressure extreme conditions. By performing in-situ high-pressure and low-temperature measurements with the cubic-anvil-cell apparatus, he recently discovered pressure-induced superconductivity in CrAs and MnP, which represent the first superconductor among the Cr- and Mn-based compounds, respectively. On the other hand, by using the start-of-the-art multianvil system, he have obtained novel S = 1 quantum spin liquid candidates in the high-pressure phases of Ba3NiSb2O9, and a d-electron heavy-fermion compound CaCu3Ir4O12. He has published over 120 peer-reviewed scientific papers in the journals including PRL, JACS, Nat.Comm. and PNAS. He was also one of the awardees of the “Lu Jiaxi Young Talent Award” of CAS in 2015.

Citation: For the fabrication of novel two-dimensional materials and the investigation of their low-temperature quantum properties. 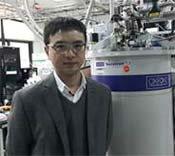